Welfare Deadbeats Should Not Vote! 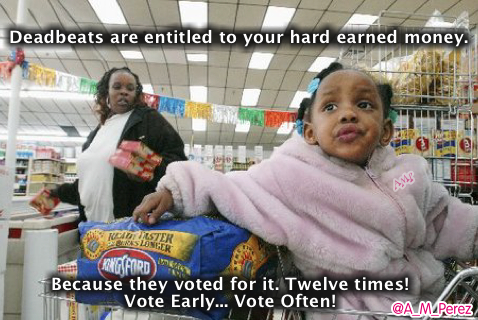 There is no constitutional right to vote.  Argue all you want, but it’s a simple fact.  To understand this, we need to set aside everything we were taught in public schools using a curriculum that is put in place by the unconstitutional Department of Education.  It’s not in the government’s best interest to teach you how to limit the government, so very little is taught about the Constitution any longer.  There are two types of rights and we can’t get them confused.  There are natural rights, those that are God given, many of which the Founding Fathers enumerated in the Constitution and Bill of Rights, such as the right to bear arms.  Then there are legal rights, which are those granted by government, so they really aren’t rights at all, since the government can take them away just as easily as they granted them.

The right to vote is a legal right and one that is granted by states, not the federal government.  When our country was founded most states required voters to be land owners, because it’s a good idea for those who have a say in government to also have a stake in it.  Most states didn’t allow women to vote, but New Jersey did.  There is no single set of rules for the entire United States with regard to voting.

In 1870 the states ratified the 15th Amendment to the U.S. Constitution.  Contrary to popular belief, this did not give blacks or other minorities a right to vote.  What it did was take race out of the infinite number of reasons a state could use to revoke voting rights.  The 15th Amendment has the word right in it, but doesn’t grant a right.  It merely recognizes that the legal right may exist in the states.  Now a state could not base a person’s eligibility to vote on their race.  If the 15th Amendment actually granted all minorities a right to vote, then it would have included black women as well, but it didn’t.  States could still bar women from voting.

Fifty years later, in 1920, the states ratified the 19th Amendment.  By doing this they relinquished the ability to use gender as criteria in determining who could vote.  Like the other amendments dealing with voting, this one doesn’t grant women a right to vote.  It says that their right to vote “shall not be denied or abridged by the United States or by any State on account of sex.”  So, they can’t deny you the legal right to vote on account of sex, but they sure could for any other reason except for race.  Legal rights to vote could still be denied based on age or a trillion other reasons.

In 1964,the 24th Amendment was ratified eliminating the ability for states to charge a poll tax to vote.  After all, how can a deadbeat’s vote be bought with welfare checks if they couldn’t afford to pay a poll tax to vote?  This amendment ensured that the decline into socialism in the United States would speed up dramatically.  This finished setting the stage which was set by the New Deal to ensure that people could vote for more and more handouts.  When people vote for their own government dependencies, it’s easier for the government to maintain that dependence.  A dependent citizen is a compliant citizen.  Scratch that…  A dependent citizen is a slave.

The myth that we have a constitutional right to vote makes people feel good, because it sounds fair, so it makes a poll tax seem unfair and a way for the rich to control things.  Well right now the rich do control things, because so many of the poor depend on government for handouts.  Another way of looking at it is that the deadbeats control things as they steal from us and vote to steal more.

Giving deadbeats the ability to vote by eliminating the poll tax wasn’t good enough.  The government wanted more deadbeats voting and the more ignorant, the better.  Along came the 26th Amendment.  It was decided that it would be wise to allow uneducated, inexperienced, clueless children to vote.  States no longer have the ability to determine who can vote based on age, over 18.  The way it is written they can not abridge the legal right to vote for anyone over 18 on account of age, but they still can abridge that legal right for anyone under 18.  Or not!  A state could decide not to abridge the legal right to vote for 12 year olds if they wanted to.  Then anyone 12 and up could vote! Again, like the previous three amendments, the 26th Amendment doesn’t grant a right to vote, it merely subtracts a reason from the unlimited number of reasons that states can use to revoke the ability to vote.

The 15th, 19th, 24th, and 26th Amendments never mention a word about welfare or other entitlements.  They are free game.  Every federal entitlement is unconstitutional with the exception of pensions.  For instance, military retirees have earned the benefits that were part of their contract when they signed on for  service.  It would be perfectly legal and tremendously beneficial for states to revoke the legal right to vote from all recipients of unconstitutional entitlements.  I may go so far as to grant an exception for Social Security, due to the fact that we have no choice to opt out.  That is a an entirely different conversation.

I would like to see voting rights revoked from all recipients of programs like Welfare, HUD, Food Stamps (EBT), WIC, and Planned Parenthood, federally funded abortions.  The revocation should last 7 years beyond the final receipt of any of these benefits to ensure they are forced to sit out one full election cycle, including senate races.  I would reduce it to 5 years if the 17th Amendment is repealed and senate elections go back to state legislatures where they belong.

Legal residents of the United States who are not citizens enjoy all the rights that the Constitution protects.  They even have the right to bear arms.  I know legal residents who buy guns.  The fact that no state allows legal residents to vote in federal elections is all you need to know to realize that voting is not a constitutional right.