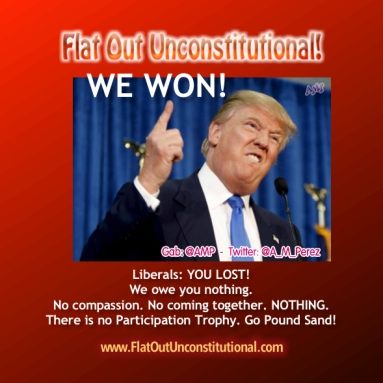 It’s the Democrats’ turn to cross the aisle!  We won! We have no obligation to “come together.”  If the left wants to come together with us, that’s their prerogative.  They are welcome to join patriots to repair all the damage Barack Hussein Obama and the left has done to our country in the last 8 years.  There can be no compromise from us.  The left never compromises and neither should we.

The Republican Party has more power now than they have had since the 1920s.  We don’t need permission or cooperation from Democrats to set our country on course to restoring our founding principles. Republicans have the majority in the House of Representatives, the Senate, and now they have the White House.  We only have two years before the Democrats have a chance to take control of the Senate and possibly the House, so we have a lot of work to do in two years.  Almost all of it should consist of repealing, repealing, repealing, and repealing unconstitutional laws.

Don’t let these Trump protests discourage you or make you feel guilty for winning!  They are fake.  They are bought and paid for.  More people showed up to any given Trump rally during the campaign than to all of the Trump protests combined.  Let the petulant children cry themselves into hyperventilation.  They don’t matter.  These are people who think they should have a trophy for participation and never got a spanking in their life.  They need to feel the most excruciating pain and anguish of defeat.  If anyone tells you that we need to go easy on them or show compassion, you just remember how much compassion has been shown to you over the past eight years.

We have been vilified for 8 years.  We have been called racists and bigots by the very people who can’t see any issue without a racial component.  It’s always about race for these people.  Black Lives Matter savages are literally running around murdering cops and others.  They are screaming “Die Whites, Die!” in the streets and calling Trump supporters racists in the same breath.  It’s asinine.  Do not give them a shred of compassion.  Kick them while they are down and keep kicking, because they will never relent when they get back up.  You are their enemy.  We have a chance to reverse the damage they have done instead of just slowing it down.  But to do it, we have to get medieval on them.  No mercy.  We won.  Don’t apologize for it, capitalize on it!

The only coming together we should be talking about is within our own ranks.  The Republican Primary did a good job of dividing us.  We are generally like minded souls.  Whatever you think of Donald Trump, he is going to be President of the United States of America, so we need to come together to accomplish two tasks.  We need to support him when he does the right thing and guide him to do the right thing if he is missing the mark.  That’s why we need his most ardent supporters as well as the Never Trump Conservatives to come on board.

We won, but Trump isn’t Jesus.  He isn’t perfect.  He isn’t a Constitutional Conservative.  He did move to the right.  His move to the right was born of frustration with Big Government and a genuine love for America, not a deep understanding of history, our founding, or the Constitution.  He is vastly more preferable to Hillary Clinton and most of the others who ran for the Republican nomination, such as Jeb Bush or John Kasich, who are just liberals.  It’s our responsibility to keep Donald Trump in line and not let him compromise conservative principles.  We would never have been able to do that with Hillary Clinton, but Trump genuinely wants to make America great again.  Of that, I have no doubt.  I believe that Trump is good about listening to advisers, so we need to make sure his advisers give the right advise.

Trump exploded onto the scene, because he unapologetically voiced what so many desperately wanted to hear.   He wanted to build a wall, deport illegals, and keep muslims out.  We cannot allow him to back-peddle on these things.  The left and the media will do anything in their power to convince Trump that the people really didn’t want him to go that far.  No… it was precisely going that far in his rhetoric that created the Trump Train.

I would like some refinement in some of his policy plans, but not necessarily by much.  One particular example would be Trump’s plan to repeal and replace Obamacare.  Repealing is fantastic.  Replacing is unconstitutional.  It doesn’t matter what excuse anyone comes up with, any replacement is unconstitutional, because it is none of the Federal Government’s business.  People say, “but his plan is to make it private and allow more competition as well as crossing state lines.”  Make it private?  Where does the Constitution allow the federal government to “make it” anything?  BUTTING OUT makes it private.  Allow more competition? Again, butt out.  It’s not a federal role to ALLOW anything of the sort.  They have no authority to disallow it.  Just repeal all of the unconstitutional laws that disallow competition or crossing state lines.  All the replacement that is needed is for the Federal Government to butt out.

I doubt it will come to pass, but on President Trump’s first day in office, he should write his first and last executive order.  It should simply say, “Every executive order signed by President Obama is hereby rescinded.”  That’s it.  Done.  In a single sentence, President Trump can undo enormous amounts of damage.  We the people must impress this upon Donald Trump now, before he takes office.  No one needs to cross any aisles to get that done.

The second thing Trump should do is immediately put forth a recommendation to the U.S. Senate for Scalia’s replacement on the Supreme Court.  I know Trump made a list of 20 Supreme Court picks, but I don’t think anyone would complain if he added Ted Cruz to that list.  Texas can easily replace a senator with another conservative Republican.  I am just throwing that out there.  Trump should remember that by the time he enters office, the Republicans in the Senate will have steadfastly refused to consider anyone Obama nominated for the position for 11 months.  They have stood firm on this issue for one reason: to wait for a Republican President to replace Scalia with someone who is just as constitutionally conservative.  This is not an issue that can be compromised on.  Republicans don’t often show evidence of having a spine, but on this issue they did.  We must take the opportunity to ground the Supreme Court in constitutional conservatism.

Once more, do not forget that WE WON!  Liberals didn’t win.  Hillary didn’t win.  Hillary didn’t even have the popular vote the media claims she did.  On national TV, Obama told illegals they would face no recrimination for voting.  Take away the illegal voters, the dead voters, the repeat voters, and rigged voting machines and it’s a different story.  When people tell you that Hillary won the popular vote, remind them that we are not a mob ruled democracy.  Our Founding Fathers gave us a Republic.  Also remind them that we only accept legitimate votes in the tally.  All it will take is repealing the 26th Amendment to put a stop to ignorant, 18 year old children from being able to vote.  I highly support this.