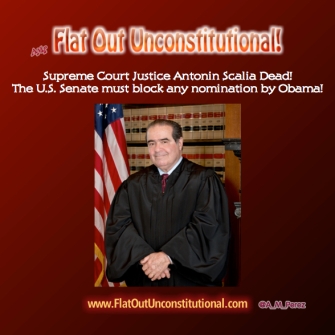 Justice Antonin Scalia was found dead at the Cibolo Creek Ranch, where he was a guest.  His death, at the age of 79, appears to be of natural causes.  May he rest in peace.  He was one of a scant few in Federal Government who still respected the U.S. Constitution.

With President Obama in office, this couldn’t come at a worse time.  During the Republican Primary race, many have been concerned with the notion that the next President will have to appoint new Supreme Court Justices.  This is a subject that Ted Cruz supporters have been beating a drum about, but which supporters of all candidates are concerned with.

With almost a year left in office, it is very possible that Obama will be choosing the next Supreme Court Justice, but rather than replacing one liberal with another, as he did with Sotomayor and Kagan, he will be replacing the most Constitutionally Conservative Justice with a Constitution hating socialist.

There is hope.  If the establishment Republicans in the Sen turn over a new leaf and decide to do what is right for America for a change, they can hold out on any confirmation to the Supreme Court until the next President is sworn in next January.  The confirmation process for a Supreme Court Justice used to be very quick, but in recent years has taken an average of 60 days and up to 90 days.  It can take longer if the Republican Party holds the line.  It only takes a majority vote of the Senate, 51 votes, to confirm a Supreme Court Justice, unless other Senate rules are put into motion.

Once the full Senate has the decision to make, they debate the nomination.  The debate doesn’t end until someone asks for a unanimous consent to end the debate and move to a vote.  However, this is deceiving, because a unanimous consent isn’t even required, because of Senate rules that say they can have a cloture motion to end the debate.  It used to take 60 votes to end the debate with a cloture motion, but in 2013 the Senate changed the rules to require only 51 votes.  Luckily they applied that change only to votes on legislation and not on Judicial nominations, so they currently still need 60 votes to end the debate and put the nomination to a full Senate vote.  If that happens, that vote only takes 51 votes.  Joe Biden breaks a tie.

If the Republicans have ever wanted to do anything right for America in their entire lives, this is the time.  They must not allow a single nominee for Supreme Court Justice to be voted on in the Senate until after the next President is sworn into office.  It is imperative that everyone let their Senators know that they are serving their very last term in office if they allow Barack Hussein to appoint another Supreme Court Justice.

Senate Republicans have already announced that they will not confirm another Obama appointment to the Supreme Court no matter who it is.  Mitch McConnell says the next President should replace Scalia.  Let’s make sure we hold the Senate to this.

Questions have been asked as to whether or not Obama can use a Recess Appointment.  Originally I read that the Senate reconvenes on Tuesday, but this was wrong.  They are in fact in a week long recess, but this is really not a huge concern.  Obama has already lost a similar case in the Supreme Court, in The National Labor Relations Board v. Noel Canning.  The decision was that it’s up to the Senate to say when they are in recess and the recess has to be longer than three days.  McConnell can simply call a pro forma session with as few as one Senator showing up to work on legislation, no matter how minor the work.  It was also decided that the temporary recess appointment lasts only until the end of the next Senate session, which would put it on about March 20th.  So there is nothing to worry about as far as a recess appointment goes.  This is in the hands of the Senate, not Obama.