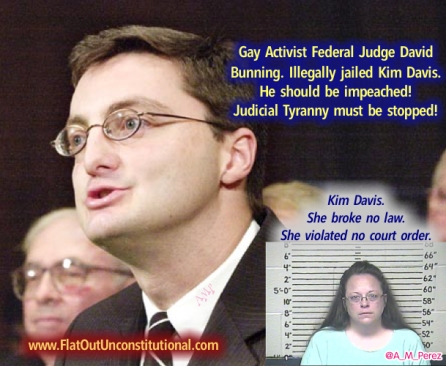 For days people have been arguing about Kim Davis’s refusal to hand out gay marriage licenses in Kentucky on social media.  This issue isn’t even about gay marriage.  The Supreme Court unconstitutionally threw out the laws and constitutional amendments of all states which banned gay marriage.  This was a large majority of the states.  These laws were legislated by legislative branches of government or voted on by the people and passed legitimately.  The Supreme Court has no constitutionally enumerated authority to rule on the Constitutionality of a law or to throw out a law. None.  You will not find these powers listed in Article 3 of the U.S. Constitution, as the 10th Amendment requires.

Federal Judge David Bunning found Kim Davis to be in contempt of court when she refused to break Kentucky state law and hand out marriage licenses to homosexual partners.  She based her decision on religious grounds.  Her religious beliefs are protected from the federal government.  The 1st Amendment says, “Congress shall make no law respecting an establishment of religion, or prohibiting the free exercise thereof.” This makes it impossible for there to be a federal law that Kim Davis broke.

In 2003, Judge Bunning ordered Boyd County High School to allow a gay club against the will of the school and the parents.  Part of his order was that the school implement a mandatory reeducation program for the school staff and students to learn about diversity and be forced to accept homosexuality.  None of his order was constitutional or legal.  Ordering civilians around is not a constitutionally enumerated judicial power.  Neither is force feeding sinful propaganda to people in violation of their religious core beliefs.  No power is enumerated to the federal government or judiciary to mandate what schools teach or what clubs they allow.  This judge is a verified gay activist, rogue.  He should immediately be impeached.

Liberals and dime store conservatives (a term I am coining right now, to mean people who claim to be or may want to be conservative, but whose knowledge of the Constitution isn’t worth 10 cents), have been jumping on the talking point bandwagon that Kim Davis broke the law.  Not one person has been able to cite the law she is accused of breaking.  There is no law which says that she must hand out gay marriage permits.  The Kentucky State Constitution says the exact opposite and outlaws gay marriage.  There is no federal law, which legalizes gay marriage.  The federal government has no jurisdiction over marriage.  Kim Davis has been falsely arrested.

Liberals and dime store conservatives are also saying that being in contempt of court is why she was arrested.  Really?  What court gave her an order?  What court case had her on the docket?  Are we seriously being told that the Supreme Court has the power to give a blanket order to all Americans at large now?  Can someone please provide the Constitutional Amendment, which grants this power to the Supreme Court?  The Constitution allows courts to decide a case based on the law, not change the law and apply it to the nation.  I would like to see the court order from the Supreme Court directed to Kim Davis, which she violated.  As far as I know, no such order exists.  You can’t be held in contempt of court if you were never party to the trial and courts can’t legislate or give orders to the public.  It’s terrifying that we actually have a populace who is so dumbed down, that they are gleefully surrendering their liberty in favor of judicial tyranny.

Liberals and dime store conservatives are trying to justify the Supreme Court’s decision on gay marriage with the 14th Amendment.  Let’s set aside the fact that the Constitution does not allow the Supreme Court to interpret the constitution or to determine the constitutionality of laws.  This isn’t even the real topic at hand, but just to get this out of the way, the 14th Amendment does not protect gay marriage.  If it did, gay marriage would have been around since 1868 when the 14th Amendment was ratified.  It’s amazing how much this election cycle is riding on arguments over an amendment, which was never even legally ratified in the first place.  That is a topic for a different time.

Equal protection of the laws does not mean equal privileges.  Marriage has always been defined as being between opposite genders.  Everyone, straight or gay have always had the same, equal opportunities to get married if they wanted to.  What homos want is a change in the definition of a word.  They don’t want equality, they want extra privileges.  They want same sex partners to be able to marry one another, but only if they are homos.  I asked someone on Twitter, “Why cant a woman marry her mother based on the same fallacy that the 14th Amendment’s equal protection clause allows it?”  He replied, “Because that’s incest!”  He didn’t even see his own hypocrisy.  So what if it’s incest.  Homosexuality is gay!  Who is he to decide that gayness is better than incest?  If he wants free and open marriage to be defined by the equal protection clause, then he is not allowed to draw any lines in the sand.

Where the left gets really confused is when they think the issue over gay marriage is about equal rights.  There is no constitutional right to get married.  The federal government has no authority over marriage.  This issue is not even about marriage, especially for a constitutional conservative.  This is about usurpation of power by the judiciary and a populous who is too stupid to understand it.  This is about federal encroachment in state issues.  This is about 5 people in black robes, abusing power they don’t legally have, to thwart the will of the vast majority of 320,000,000 people.

I have just shown how easy it is to get off course and start talking about gay marriage, when that isn’t the real issue regarding Kim Davis.  The action of Federal Judge David Bunning is what we should be discussing.  It doesn’t matter what the issue is, Judge Bunning had no authority to make his ruling and the fact that the Kentucky law enforcement are blindly going along with it is a sad day for Kentucky.  Shame on you Kentucky for capitulating to unlawful orders.  Read your own constitution, Kentucky!

A message to all of you liberals and dime store conservatives out there.  If you jump in on this debate and all you have for your side of the argument is a claim that Kim Davis broke a law, was held in contempt of court, or that the 14th Amendment protects homosexual marriage, then you have already lost the debate.  Kim Davis broke no law.  Courts can’t hold you in contempt for disobeying the ruling of a court case you weren’t involved in. Whether the 14th Amendment protects homo marriage is not part of this issue and it’s a diversion.  The 14th Amendment grants equal protection of the laws, not equal legislation of the laws or equal privileges.  We can argue about marriage until the cows come home, but this isn’t about gay marriage, it’s about judicial tyranny.  The subject of the 14th Amendment is moot.  If you are so eager to allow the Supreme Court to usurp power they don’t have in order to give dictatorial decrees to America, then God help you when your turn comes to have the hammer brought down on something you cherish.  You shouldn’t be so hasty to give up your liberties to 9 rogue justices in black robes.

One last nugget to chew on.  If Kim Davis can be held in contempt of court for not obeying the Supreme Court decision over a case she took no part in, doesn’t that mean that every school in Federal Judge David Bunning’s jurisdiction is in contempt of court if they don’t also have a mandated gay propaganda class and a school sanctioned gay club?  This is why people not involved in a case can not be held in contempt.  Where would it end?  Judicial tyranny has to stop.  The only way we have a chance to stop it is to wake America up.  Educate your friends and family.  Don’t let them be victims of federally influenced public education.