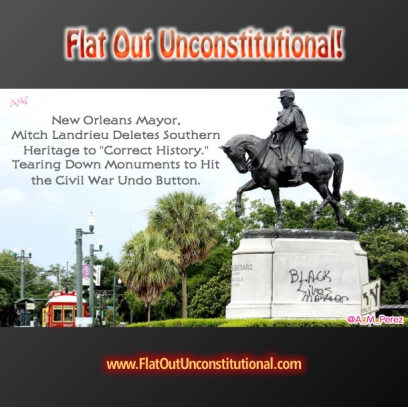 Liberals never stop trying to ban anything American.  This is especially true when it comes to history, culture and tradition.  Mayor Mitch Landrieu of New Orleans signed an ordinance to have four historical Civil War monuments removed.  The statues are of Confederate President Jefferson Davis, General Robert E. Lee, General P.G.T. Beauregard, and a monument that was dedicated to the Battle of Liberty Place.

The Battle of Liberty Place was in 1872, seven years after the end of the Civil War in 1865.  A group of 5,000 white Democrats known as the White League overthrew the Republican majority government in New Orleans and occupied the New Orleans State House until President Grant sent troops to take it back.  Mitch Landrieu of course, is a democrat and follows the Democrat playbook.  He will do whatever it takes to either blame Republicans for past Democrat sins or he will erase them from history.

After signing the ordinance passed by the New Orleans City Council to remove the four monuments, Landrieu said, “We, the people of New Orleans, have the power and we have the right to correct these historical wrongs.”  No historical wrong is being corrected, because history already happened and Landrieu’s lack of a time machine makes him a liar.  No, he isn’t correcting anything.  He’s burying history.

It’s true that the winners write the history, which is why we are taught in schools that the Civil War started over slavery and that the North were the good guys and the South were the bad guys.  We don’t get both sides.  We don’t hear that Lincoln publicly supported an Amendment to the Constitution to make slavery permanent.  We aren’t taught that he suspended habeas corpus by usurping power that the Constitution reserves only for Congress.  We aren’t taught that the southern states seceded even after being offered permanent slavery on a silver platter.  No, we’re supposed to think that slavery was the issue being fought over in the Civil War.  Those in power in the Federal Government, especially on the left, can’t afford for We the People to get uppity about states’ rights again.  That’s a subject they don’t ever want us talking about.  We’re taught one side of history and one side only, but to erase history altogether is even worse.

Landrieu said, “We must reckon with our past.  With eyes wide open, we should truly remember history and not revere a false version of it.”  He says this while tearing history down, bulldozing it out of sight and out of mind.  He is shutting the eyes of the people, so that no one can remember history at all.  We should forget about the 620,000 who died in the civil war, roughly half of all American war deaths the United States has had from 1775 to 2015.  We should especially forget about the 258,000 Southerners who died fighting in the Civil War.  Fallen Southerners are a false version of history according to Mitch Landrieu.

However you feel about the Civil War and whichever side your loyalties lie on, even today 150 years later, the truth is that the Civil War did happen.  If we forget history, we may be destined to repeat it.  The Federal Government tramples on the rights of States today, far more than anyone could conceive of in the 1860’s.  The left seems to be working very hard to create divisiveness in America in any way they can.

We have leftist race baiters who are doing everything within their power to stoke hatred based on racial tension in minority communities with groups like Black Lives Matter and even La Raza (Spanish for The Race).  At the same time, we have a government who is allowing illegals to cross our border in the 10’s of millions, even providing them buses to get here.  They are also importing millions of muslims who hate everything our country stands for, but who won’t complain about receiving their welfare checks, food stamps and government housing.  While purposefully dividing us liberals wage a constant battle against the constitutional rights of Americans.  They infringe on our 2nd Amendment rights, search us without warrants in airports, and convict us without due process via bills of attainder, by adding us to no fly lists.  Those are just a few examples.  The left is doing everything they can to thoroughly destroy American values and our way of life.

We cannot afford to forget history. We can no longer count on the public education system to teach history to our children.  They teach Social Studies, a liberal indoctrination in the way we are supposed to behave as a society.  Individual responsibility and personal opinions are frowned upon. Public education teaches us to be hive minded.

There is a glimmer of hope with regard Mitch Landrieu’s desecration of history in New Orleans.  This didn’t come unexpectedly, so it only took one day for a huge federal lawsuit to be filed to put a stop to the removal of the monuments, starting with a temporary injunction and restraining order and moving on to a permanent injunction. The case looks very promising, because it doesn’t appear that the city has ownership of the monuments or the authority to remove them.  We shall see.  The city wants to tear the monuments down immediately, in just a few days, so the dirty deed will be done before anyone could do anything about it.  They would have gotten away with it had the law suits not been prepared in advance.

Watch out for this kind of thing in your states and cities.  Don’t feel complacent if your local government has a majority of Republicans, because many of them will go along to get along.  The mere thought of bad press will cower most Republicans in to complying with liberal demands.  Be ready to hold them accountable and always remind them of why they are in office.  Remain vigilant and intolerant of historical and cultural destruction.  Learn and remember history, both good and bad.  We learn lessons from both, so we can sustain the good and avoid repeating the bad.