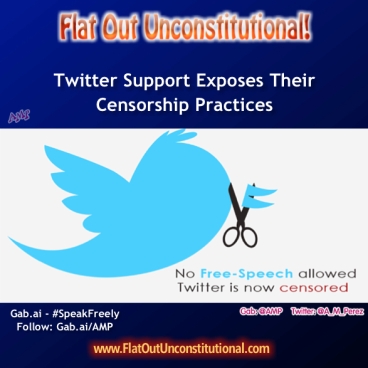 They tried to stall me, thinking they could treat me like an ignorant child who doesn’t know what is going on.  I gave them every opportunity to simply disengage the shadowban they put on me without having to admit that this is what they had done. Rather than save face, as I was allowing them to do, they tried to patronize me.  This only exposed their attempt to cover up their shadowbanning actions. They claimed that I might have problems with my settings or with Twitter addons or applications.  They don’t want to admit to shadowbanning people for political reasons, but they don’t want to lift the shadowban either, so this presents a dilemma when the shadowban is obvious.  This is especially true when they can’t point to a single rule someone has broken.  I have asked in several support tickets what I have done wrong.

On  September 19th when I realized I was shadowbanned, I began submitting two support tickets per day to Twitter asking them what was wrong with my account, because my tweets reached none of my followers.  I asked if there was anything I had done wrong or any rules I had broken, because I was in the dark and if I had to make corrective actions on my behavior, I needed to know what the poor behavior was.  I pleaded with them.  I explained that I wanted to work with them and follow all of their rules, but that I couldn’t determine what rule, if any, that I had broken.  I sent in perhaps a dozen support tickets. Not one was answered.

On October 2nd, I received an e-mail from Twitter informing me of upcoming changes to their TOS (Terms of Service) and to their Privacy Policy.  There was a link in the e-mail to the TOS.

Once I reached the TOS page, I actually read it.  Who does that?  I do. On the page is a note that says, “If you have any questions about these Terms, please contact us.”  Clicking the link on the word “us” brought up a completely different way for me to contact Twitter Support than through their normal Support Forms section.  It no longer does, they fixed that now.  However, I entered in a support ticket on the other site this took me too in the form provided.  I believe you can still get there by going to the normal Support Forms section and choosing to put in a support ticket regarding Privacy and choosing “I want to ask a question regarding privacy on Twitter.”

In the support form, I provided a brief description of my problem, that my tweets were invisible to my followers, etc.  I don’t have a copy of the exact text I entered into Twitter’s support form, because they don’t send you a copy of it and I never thought to keep it for posterity after a dozen other tickets went unanswered.  They finally answered this ticket and a short e-mail conversation back and forth ensued.

Twitter’s initial October 2nd Response was automated and actually gave me a case number. No other ticket I entered had done that. Case# 40680580: Privacy. I am leaving the case and reference number in the e-mails from Twitter for continuity, but cut out the rest of the header because it contains my Twitter login e-mail address.

Note: Their automated e-mail requires my reply.  I sent this reply.

On October 4th I received another e-mail from Twitter, which appeared to show interest in addressing my problem.  This is admission that I have a problem and am not being punished for breaking a rule.

Well, I know my account wasn’t compromised, but let’s play along.  Maybe this is Twitter’s way of releasing my shadowban without admitting it.  Get me to jump through a few unrelated hoops that someone who isn’t computer savvy might fall for, then let me out of jail, and wha-lah!  No one is the wiser!  So, I did as they told and responded immediately.

Twitter Support replied by trying to send me off to open a ticket like the other 12 I had already wasted my time submitting. 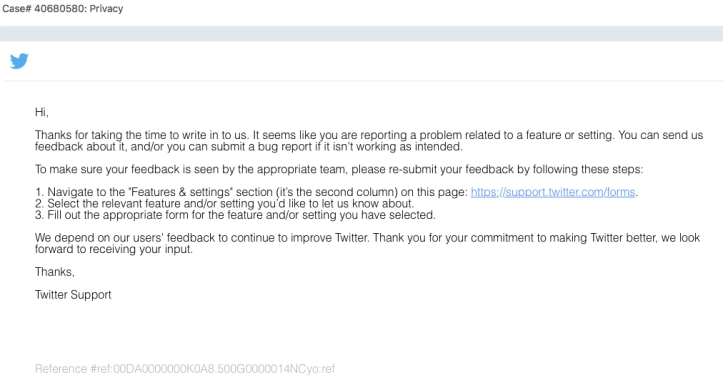 Since this was the only time I had the attention of anyone at Twitter, even if they were feeding me lines of bull with cookie cutter responses, I replied back.

Twitter responded with another idea to fix my problem.

I only have a couple third party applications that I use with Twitter, so I followed their instructions and disabled them.  Of course that didn’t help at all, so I replied.

Up to this point, the e-mail conversation had all taken place within a brief span of time on October 4th.  I didn’t receive a response for the rest of the day, so on October 5th, I resent this response with a few minor changes.

On October 6th, I sent another appeal for help. I asked that my case be elevated to a supervisor or someone who could actually help. 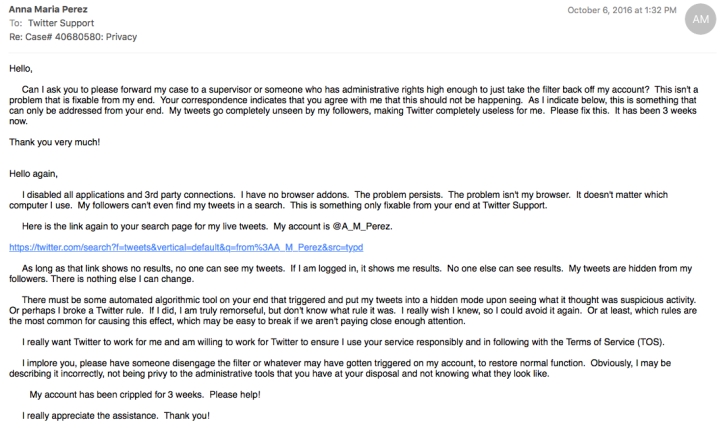 So… What can we determine with certainty?  I am definitely shadowbanned.  I provide ironclad evidence here: Shadowbanned into Submission.  Twitter admits there is a problem and feigned help to solve the problem.  Twitter absolutely does not accuse me of breaking any rules.  They outright refuse to address that issue when I bring it up.  This is happening to millions of conservatives on Twitter and other social media outlets, such as Facebook.  This issue is getting no media attention at all.  Shadowbans are meant to go unnoticed.  The only issues that make headlines are outright account suspensions, because they are definitely noticeable.

Conservatives are being silenced during a Presidential campaign by liberals who run social media. This must be exposed by people with louder voices than I have.

Finally, you can now find me on Gab. Join me there.  Here are the details.

Twitter Support did not answer my final response back to them above, so I sent a couple more replies.  I quit pretending that I didn’t know I was shadowbanned.  I only kept up this pretense of ignorance to allow Twitter to remove their shadowban without having to admit to it.  I was giving them the chance to save face.  They failed to take me up on that implied offer. My next reply was on October 9th.

On October 16th, I decided to see if one more shot would do the trick.

Within seconds I received an automated response from Twitter Support. 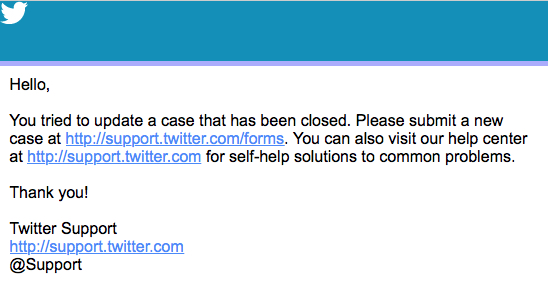 This is where I started screaming words that are inappropriate for children to hear.  Did my two replies to Twitter Support after receiving their cookie cutter responses give any indication that I was happy and my problem was solved? Does Twitter hire their Support Staff from the Houston, Texas 911 Dispatch Office?

Ok, here we go again. I opened a new support ticket.  Of course they don’t send you a copy, so this time I copied the text.  Here is what I wrote.

My account is shadowbanned. It’s been a month. I’ve explained everything in case number 40680580, which was closed without addressing my issue. Please release my account from blocking all my tweets from reaching followers. This is unfair. I have been accused of breaking no rules in all of my communications with Twitter. Please fix my problem & allow me to use Twitter unfettered.  I believe this to be caused by some automated algorithm, but requires manual override. Please fix. Thank you.

I immediately received this automated response, which gave me the feeling of de ja vu.

So, since they require a reply for some reason, I complied.

Now I sit and wait.  I expect no less than another complete blow off from Twitter Support.  We shall see.