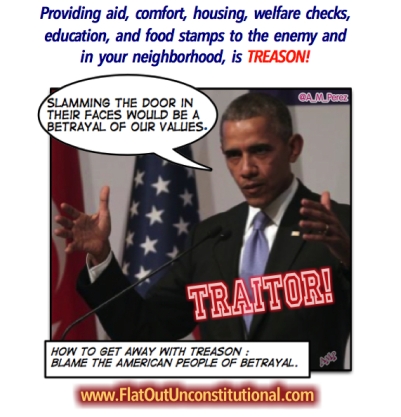 Treason.  It’s the only word defined in the U.S. Constitution.  In Article 3, Section 3 it is defined, ” Treason against the United States, shall consist only in levying War against them, or in adhering to their Enemies, giving them Aid and Comfort.”

America, we have a problem.  We have a President who is committing treason on a regular basis and a spineless Congress which won’t put a stop to it, a sign that they’re complicit.  Barack Obama continually does things to undermine our national security in ways that both adhere to our enemies and provide them aid and comfort.  There is no clearer form of aid and comfort than to bring enemies to our shores and set them free amongst our communities and families.  We’re told that these are refugees.  When you see the word refugees, think of it defined as, “violent, muslim, jihadist who wants to cut off your head.”  That is the only definition of refugee that is truthful with regard to muslim refugees.

There are countless examples of Obama’s actions that have been treasonous.  Article 2, Section 2, Clause 2 of the Constitution says that treaties must have 2/3 consent of the U.S. Senate, but Obama made a treaty with Iran to hand them the keys to nuclear bombs and gave them 100s of billions of U.S. taxpayer dollars with no Senate consent.  We have no enemy that is more admittedly and outwardly hostile toward the United States than Iran.  They march in the streets in parades shouting, “Death to America.”  Obama convinced the entire U.S. media to ignore the Constitution and claim the opposite of what it says.  They reported that 2/3 of the Senate was needed to stop Obama from making this deal, when in fact 2/3 was needed to approve it or no deal exists.  The senate is just as guilty for not asserting their power to stop the deal.  For this unconstitutional treaty with our enemy, Obama should be convicted of Treason under Article 2, Section 4, “The President, Vice President and all civil officers of the United States, shall be removed from Office on Impeachment for, and Conviction of, Treason, Bribery, or other high Crimes and Misdemeanors.”

Clinton was impeached for merely lying under oath.  Obama has never told the truth, is currently held in contempt of court, has had many of his actions halted by federal courts for being unconstitutional, and has abused power.  To say that he abused his power would be false, because the power he abuses isn’t authorized under Article 2 of the Constitution.  He is usurping unauthorized power and then abusing it.  There is no constitutional power for executive agreements, executive deals, executive amnesty, or executive orders.  Executive Agreements, deals, and amnesty are completely unconstitutional.  There are no such things.  Obama gets away with them because Congress is corrupt.  Executive orders are a term used to describe an order a president gives to his own chain of command.  The concept of executive orders has been twisted and misconstrued to be a power to give royal decrees.  It is true that previous presidents have given executive orders, as far back as George Washington, most of them legitimately confined to their chain of command.  Some presidents have abused executive orders to some degree, but Obama has taken this abuse to a whole new level.  He thinks he can order We the People around, not just the military and executive branch employees.

King Obama gets away with anything he desires and he does whatever it takes to destroy the United States of America.  We’ve all been saying how stupid it is for the western world to continue allowing muslim immigration from the middle east.  Organizations like ISIS tell us to our faces that they are recruiting in Europe and America as well as using our weak immigration laws to infiltrate us through both legal and illegal immigration.  ISIS isn’t keeping it a secret, they are telling us.  Muslim refugees are swarming through Europe in the hundreds of thousands.  The only European country that seems to have any sense at all is Norway, which deported 70,000 muslims and their crime rate immediately dropped by 31%.

Europeans ignore the threat with a vigorous passion.  Even after muslims attacked the Charlie Hebdo cartoonists killing 12, France and other European countries just kept on importing more and more muslim refugees.  They think they can defeat radical islam by appealing to moderate islam.  There is no such thing as moderate islam.  Those muslims who appear moderate are practicing the first of three phases of jihad, which begins with lying about peaceful intentions, so they can quietly invade and build up numbers and power.  Islam is islam.  This is all described in the Koran.

We keep being told by the incompetent left wing media that these refugees, almost all of which are young men, are fleeing from violence.  ISIS tells us that their members are among the refugees and plan more death and destruction.  ISIS is also praising the Paris attacks and vowing an attack on Washington D.C. soon.  Obama’s response is that America has a moral responsibility to allow Syrian refugees into the United States.

After being warned by ISIS themselves and by those of us who aren’t wearing blinders, France was attacked by muslims again, only this time 153 were killed and several hundred more were wounded.  France and the rest of the world acted surprised!  There was nothing surprising about it except for how long it took before it happened.  In the wake of this, we have President Obama doubling down on his plan to import more of these enemies into the United States and scatter them throughout our communities.  Every democratic presidential candidate wants to do the same and actually argued in their debate over which one of them wants to bring more muslim invaders into America.  This is sick!  This is outright treason.

States whose governors say they will accept refugees: Colorado, Connecticut, Delaware, Hawaii, Pennsylvania, Vermont, and Washington.  If you live in one of these states, you’d better watch your back!

26 states is a fantastic start, but there are two problems that we all have to consider.  First, we’re only talking about Syrian refugees right now.  Obama has already imported close to 200,000 muslim refugees from other middle eastern countries.  Second, states have open borders.  There are very limited means by which these savages can be stopped from coming into your state once admitted into the U.S., even if your state refuses to take part in the resettlement plans.  Limited means, but not zero means.

States, under Article 1, Section 10 of the U.S. Constitution, may go to war against actual invasion without any federal or Congressional consent.  It’s right there in black and white, folks.  Implore your governors and state legislatures to use their State National Guard to counter this invasion.  States can round up the refugees, then detain and/or deport them.  You need no federal government help or permission.  Next, arm yourself.  Do whatever it takes to protect yourself, your family, and your community.  Do not allow an enemy invasion force in your community.  You can join groups such as state and local militia that can organize with your state and local governments to put a stop to this.  Enlist the cooperation of your state and city police as well as sheriff departments.  If there are enough of us demanding that our state governments put a stop to it, it can be done.  When the federal government and the President of the United States are committing treason, you have to work with your State to keep things right and protect your communities.  There are legal and constitutional methods to follow to put a stop to this madness.  Continue pressuring Congress to impeach Obama and for the love of God, do not sit out the next presidential election!  Vote!  We can not allow Hillary to continue this madness!

John Kerry, never to be left out when America can be thrown under the bus, visited Paris after the terrorist attack.  Kerry said, “We are all Parisians.”  No Johnny, I am an American.  I am well armed.  I do not surrender.