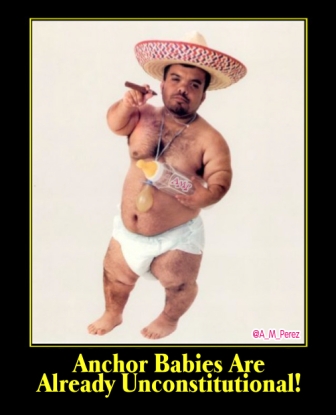 Wong Kim Ark was a Chinese man who was born in the United States to Chinese citizens.  They returned to China and took little Wong with them.  Eventually Wong wanted to come back, but he wasn’t allowed due to the Chinese Exclusion Act of 1862 that prohibited all immigration of Chinese laborers to the United States.  Wong sued and his case went all the way to the Supreme Court and they pulled a rabbit out of their hat and said that the 14th Amendment granted him birthright citizenship, which it clearly doesn’t.  The Supreme Court often misinterprets the Constitution, which is why the founding fathers did not give them the power to interpret the Constitution to begin with.  They purposefully left judicial review out of the list of enumerated powers that the Constitution authorizes the courts.  The Supreme Court usurped this power in Marbury v. Madison and it hasn’t yet been properly challenged.  I have my hopes.

Now that Won Kim Ark was granted citizenship based on a misinterpretation of the Constitution, the other unconstitutional power of the Supreme Court kicked in, which is to set precedent, effectively legislating a new law.  Now it applied to all babies born on U.S. soil.  This went on until 1965 when it was no longer good enough to liberals to merely give birthright citizenship to the children who were born in the U.S.  No, liberals wanted this birthright to extend to the family of the baby.

Congress passed the unconstitutional 1965 Immigration Act.  This gave birth to the term “anchor baby.”  Listen carefully to those on the left like Jeb Bush who keep saying, “If you’re born in this country, you’re a citizen!”  They are deflecting the issue.  The term “anchor baby” has nothing to do with the citizenship of the baby.  It’s far worse now.  The baby is granted birthright citizenship straight out of illegal alien womb and instantly legalizes the alien who birthed it.  The baby anchors the mother to the U.S. with a green card.  It keeps getting worse, because the chain on this anchor has gotten longer and now applies to a growing list of extended family members.  When an illegal alien squeezes out a kid on American soil now, the kid is holding a bag of green cards for the whole family waiting on the other side of the border.

Even if you are stupid enough to believe that the 14th Amendment grants citizenship to any baby born on American soil, it’s asinine to assume this extends to the entire family.  Granting birthright citizenship to the baby of an illegal alien is unconstitutional enough, but the 1965 Immigration Act is borderline treasonous.

There is no need to ratify another amendment to get rid of birthright citizenship, because it doesn’t exist.  We merely have to stop applying unconstitutional Supreme Court decrees to the populous.  They can’t legislate.  All we need to do is read the 14th Amendment and follow what it actually says.  This is not to say that I wouldn’t love to see the 14th Amendment repealed anyway.  There are other reasons that I want it repealed, which I cover in more detail in my E-Book.