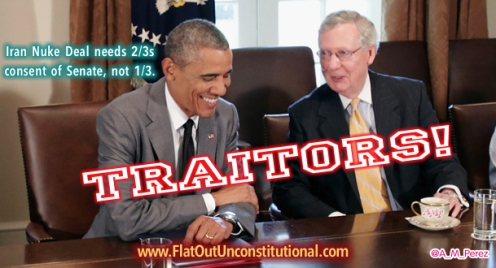 How have we gone this mad?  I keep seeing headlines everywhere, such as the Washington Times saying, “Obama Secures Votes to Preserve Iran Nuclear Deal Despite Majority Opposition.”  This is asinine!  This isn’t how it works!  Where is Mitch McConnell calling the President and the media out on this?  This is illegal.  This is Flat Out Unconstitutional!  Mitch McConnell could end this with one press conference by simply laughing and saying, “Obama thinks he’s God or something, because he clearly has no such power.  This deal is not happening.  Enjoy the rest of your day folks.”

Article 2 of the Constitution enumerates the powers of the President.  Every power he has must be listed.  According to the 10th Amendment, he has no power that is not specifically delegated to him by the Constitution.  Article 2, Section 2, Clause 2 says, “He shall have the power, by and with the Advice and Consent of the Senate, to make Treaties, provided two thirds of the Senators present concur.”  Two thirds of the Senate is 67, the last time I counted.  So how on God’s green earth is 34 his magic number?  It’s not!  It’s a lie.  The entire federal government is in on it.  The media is gleefully backing this backwards abuse of power by not reporting the truth.  Everyone, and I mean everyone in the media is either completely ignorant or guilty of complicity.  No one is reporting this.

The media has continuously been reporting about the 34 votes in the Senate that Obama needs to provide a veto proof Congress, so he can get away with his deal to arm Iran with nukes.  Veto?  What veto?  He doesn’t have 2/3 consent, therefore there is no treaty.  There is nothing to veto.  Congress doesn’t have to pass a law to block a president from forming a treaty.  The Senate has to consent to it with a super majority of two thirds!  The House of Representatives has absolutely nothing to do with the process.  It is impossible for a treaty or lack thereof to be vetoed!  Congress doesn’t vote down treaties and then need a big enough majority to block a veto.  My God, people!  Wake the heck up!

Semantics is also playing apart in this crime.  Obama knows that We the People are too stupid these days to understand something so simple as renaming a rose.  Yup, now a rose by another name is a turnip.  All he has to do is call a treaty a deal and wha-lah!  He also knows that no one in the media or the Congress will call him out on his word games.  It doesn’t matter what you call it.  When one country strikes a deal with another country, it’s a treaty.   This isn’t a complicated or misinterpreted word in our dictionary.

This Iran nuke deal is impeachable.  Everyone involved is impeachable.  This is treason.  It is providing aid and comfort to our enemy.  Iran is an ardent enemy of the United States of America.  Iran has a holiday each year called Quds Day, which centers around rallying cries of “Death to America” and “Death to Israel.”  They burn our flags and images of our leaders in effigy.  They make no bones about their role as our enemy or their hatred for us.  Obama has no business making treaties with this evil regime, but even if he did, he must do it legally and constitutionally, with 2/3 consent of the Senate.  Make no mistake, this is treason!  Every member of the senate who doesn’t speak out against this emphatically and call it what it is, treason, is also committing treason.  They should all be impeached.  The Senators who are complicit need to be impeached, removed from office and replaced before Obama can be removed from office.  We need actual patriots who cherish the Constitution as Senators to remove Obama from office after the House impeaches him.  Honestly, I want Mitch McConnell to be the first one impeached.  He is a traitor.

This could never have happened 20 years ago.  I want the republican presidential candidates to immediately and convincingly start calling this what it is.  Treason.  I want them to vow that they will undo this on day one, should they be elected.  I demand it!  I cannot believe how far we have fallen and how stupid we have become.  This is sheer lunacy and I hope to God I wake up and find out this is all a dream.  America, for the love of God, please tell me what went so wrong?