LAPD says UCLA Campus is now safe!  The Gun Free Zone sign is hung back up!  The wind must have knocked it down.

After a murder/suicide on the campus while it apparently wasn’t safe, the LAPD showed up in a massive show of force to put all of the innocent Americans on their knees with their hands up, so they could be frisked. Once it was determined that none of these Americans had the means to protect themselves by exercising their 2nd Amendment rights, LAPD Chief Beck said, “The campus is now safe. There are no suspects outstanding and no continuing threat to the UCLA campus ”  Really? What is making it safe?  The Gun Free Zone sign?

Reports were that three gun shots were heard. Not much has been released about the crime scene, but it appears as though a student murdered a professor and then committed suicide.  A suicide note was left, but has not been released to the public.

Not letting the opportunity for a school shooting to go to waste, UCLA was immediately swamped with media and what appeared to be 100s of police in SWAT gear. No official count of how many police were there is readily available.  Barricades were created out of the Fire Trucks from 11 Fire Companies.  17 Ambulances were on the scene.  Even the FBI and ATF made their unconstitutional appearances.  Not only do these agencies violate the Constitution by existing, they also ignored what little jurisdiction Congress illegally gave them.  Federal agencies have no business showing up to police anyone, not even in a murder case.

For two hours police swept the school, building by building. First an initial sweep followed by a secondary sweep.  Finally, after violating the 2nd and 4th Amendment rights of the staff and students by detaining them on their knees and frisking them, they had to call off the search for additional suspects.

For the most part, police are great people and do a great job. It’s when elected officials forget what that job is and create a police state that things go bad.  It’s not the job of police to replace our personal right and responsibility to protect ourselves.  No crime was stopped at UCLA today.  The people of Los Angeles, especially in the Gun Free Zone of The University of California, Los Angeles (UCLA) were not protected.  UCLA is a Gun Free Zone, so wasn’t everyone supposed to be safe?  LAPD Chief Beck says everyone is safe again now.  How well did that work out for the two who are dead?

You can never count on the police to keep you safe. Keep yourself safe.  If you replace your right to bear arms with a massive police state that illegally frisks and searches innocent people after a crime is already committed, then you’re not safe.  Protect yourself and let the police do what they do best, catch bad guys that are on the run.  The police didn’t exactly fail today.  No one paid them to prevent murder/suicides.  They did what police are supposed to do, even if they did so in a massive, costly spectacle.  They showed up after a crime and drew chalk lines.  What failed today was yet another Gun Free Zone.

Do yourself and your family a favor. Go gun shopping.  Spend some time at a range learning to use your guns proficiently.  Take self-defense classes.  It’s fun for the whole family!

Update 3 June 2016: The name of the professor who was murdered has been released along with a statement from his family via the UCLA Newsroom. 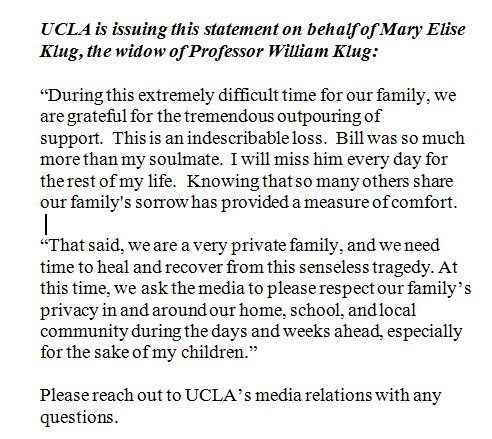 The identity of the shooter has also been released.  The shooter was named Mainak Sarkar and not surprisingly, was a muslim.  This Everipedia social media image was grabbed by Pardes Seleh before his religion was changed to Hindu on the Everipedia.  Why are they changing a muslim’s religion on his social media page after he murdered someone and committed suicide?

Update 4 June 2016: Pardes Seleh and others have since reported that Mainak Sarkar’s religion is unknown, because it was edited on Everipedia at least once.  No one appears to be coming forward to clear it up one way or the other.